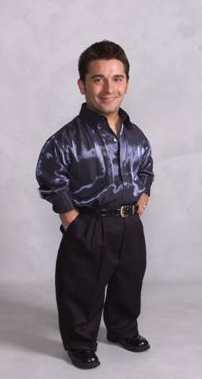 Duke Mason is a special performer because of his unique height of only 46 inches. However, his talent and charismatic personality bring a respect and dignity to his singing that only few are chosen to have. A truly multi-talented and exciting performer, Duke sings, plays guitar, keyboard, bass and drums.

Duke Mason comes from a singing family. He began singing in personal appearances with his family when he was only 4 years old. At the age of 7, he met and sang with the world famous "Duke Of Paducah" at a state fair in Des Moines, Iowa. He has also been a featured soloist with his family in concerts throughout the United States, Canada, Jamaica, and Mexico. Since their appearance on NBC's "Real People " in 1980, Duke and the Mason family have been in constant demand for personal appearances at State and County Fairs, Schools and Colleges, Theme Parks, Civic and Church Groups, as well as Radio and TV

Duke has made several guest appearances with The Terry Mike Jeffrey Band of Paducah, Kentucky. With the TMJ Band, Duke has performed for, and received enthusiastic responses from audiences in Nashville, Tn., Tunica, Ms., Memphis, Tn., Jackson, Ms., as well as Paducah, Ky., and Joplin, Mo. Over the past few years, Duke has performed several times with the Terry Mike Jeffrey Band at events and dances sponsored by Graceland in Memphis, Tn. On several occasions, Duke hs had the honor of performing with the legendary singing group The Jordanaires. After his first performance with the Jordanaires, they asked him to stay onstage and sing another song. Following the performance, they gave Duke and autographed token stating, "You are a great talent and friend, The Jordanaires ".

In September of 1995, The New York Times Magazine said, "Duke Mason rocked the house . . . ", and, "I found myself genuinely moved by the way he (Duke) took the stage and transformed himself into a giant. "

From 1996 to 1999, Duke performed with the Chapelaires at the Precious Moments Chapel in Carthage, Missouri. Seven nights a week, Duke, as vocalist, keyboardist, and MC for the Chapelaires, sang a variety of Gospel and contemporary songs. In addition, Duke hosted and performed in 6 daytime Gospel shows throughout the week. During the 1998 season, he was a cast member of the inspiring Fountain Of Angels show also at Precious Moments. For 10 seasons, he has been entertaining at one of the most popular attractions in the Midwest.

Beginning in January 2000, Duke became headliner and also musical director at the historic Main Street Music Theatre in Webb City, Missouri. He produced and arranged a weekly 2–hour variety show. Duke lead THE HEARTLAND BAND, a cast of 7 talented performers and musicians, in a high-energy stage show that was completely different every week!

Since September of 2000, Duke has appeared 4 times on the nationally televised program, "THE MAURY SHOW". The show is hosted by Maury Povitch and filmed and produced in New York City. After being interviewed and then singing, "Can’t Help Falling In Love" on his first appearance, Maury said, "…we’ve had a lot of people sing Elvis on our show, but you are absolutely the best!" Before Duke’s second appearance, Maury said, "…he (Duke) does the best Elvis I’ve ever heard!"

The singing of Duke Mason brings a thrill and genuine excitement to all that have seen and heard him.